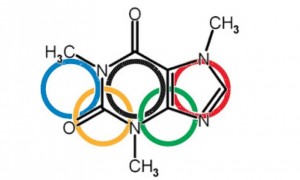 Coffee is such a great performance enhancer it was once limited in Olympic athletes. (CoffeeChemisty.com image)

Caffeine can boost athletic stamina and speed so much that the International Olympic Committee once limited how much of it Olympic athletes could take. Caffeine was categorized as a performance-enhancing substance.

The regular athlete might not be able to run a marathon in 2:02.57 like Dennis Kimetto, but maybe after an invigorating jolt of java you can one run just a little bit quicker and burn some fat in the process. Caffeine can improve performance by 1.5 to 3 percent, recent studies show. And the amount needed to give the boost is no more than that in an 8-ounce cup of coffee or an energy drink or two.

Scientists used to think that to see a difference in their performance, athletes would need large doses of caffeine. But sports medicine specialist and doctor Haemi Choi tells Men’s Health that smaller amounts help with intense, short-term sports activities. A 1 to 3 percent improvement may not matter to an amateur athlete just playing hoops with friends, but it could make all the difference in a professional or Olympic sport.

ScienceDaily reported in 2010 on a study by a team of researchers from the United Kingdom that showed that high doses of caffeine can boost endurance and muscle strength in sub-maximal activities in mice. Sub-maximal, which means the muscles are not pushed to their limit, includes sprinting and weight-lifting.

The researchers said results in humans would likely closely mimic the mice.

“A very high dosage of caffeine, most likely achieved via tablets, powder or a concentrated liquid, is feasible and might prove attractive to a number of athletes wishing to improve their athletic performance,” lead researcher Rob James told ScienceDaily. “A small increase in performance via caffeine could mean the difference between a gold medal in the Olympics and an also-ran.”

Caffeine was placed on the list of banned or regulated Olympic substances in 1972 after a Mongolian athlete had highly elevated levels of it in his blood. It was later removed from the list. The list has substances that are believed to unfairly improve performance and give an edge to athletes. It includes steroids, testosterone, androstenediol, cocaine, amphetamines and DHEA. The entire list can be read in this PDF.

CoffeeChemistry.com explains the science of how it enhances performance and burning fat:

According to researchers, caffeine increases the migration of reserved fats into the bloodstream thereby making them available during strenuous exercise and leaving a higher level of reserved glycogen in the muscles/liver. As a result the athlete ‘burn’ fat during a significant portion of their competition while providing them with a quick and readily available source of energy (in the form of a sugar: glycogen) that they can quickly make use of—say during the last 10 seconds of a race. Think of it as the “nitrous oxide” commonly used in drag racing and the extra boost in horsepower during the last moments of a race.

The Olympic movement has limited caffeine in various amounts over the years, from 12 to 15 micrograms per liter of urine. That equals about 1,000 mg taken in the space of about an hour. You would have to drink around six to eight 8- to 12-ounce cups of coffee.

“But because caffeine’s metabolism varies significantly from person to person based on gender, weight, etc.—caffeine concentrations in the urine can still remain elevated even if the coffee was consumed within a 2-3 hour period,” saysCoffeeChemistry.

The World Anti-Doping Agency bans chemicals that boost performance, place athletes’ health at risk and violate the spirit of sport.

The NCAA, the body that oversees collegiate athletics in the United States, thus still bans caffeine.

The good news for non-professional or non-Olympic athletes—just regular people going to the gym or playing soccer or hoops, is that newer research has shown normal amounts of caffeine help performance.

Athletes can train for a longer time at a greater output when they’re under the influence of caffeine, says Men’s Fitness, quoting the journal Sport Medicine.

From couch potato to champ

Don’t get visions of being 45 years old and out of shape and then starting a coffee regimen and becoming the Olympic champion in the 1,500 meter. That said, though, in addition to helping burn that roll of fat if you work out, caffeine can act as an appetite suppressant.

Another study, reported in the British Journal of Sports, found that people who ingested caffeine finished their 1,500-meter run 4.2 seconds faster on average than non-caffeinated people. If they ran the distance, which is about .9 of a mile, in 6 minutes they shaved 1.5 percent off their time.

Is having caffeine before a workout a good idea?

But the benefits of caffeine are not just physical. It can enhance alertness and concentration, which may help you stay focused on the workout and keep it productive. In other words, it might keep you from slacking off in the gym.

Another benefit is that caffeine decreases muscle fatigues, so you can do more reps at higher weight when lifting.

Also, Coffee in particular contains a lot of anti-oxidants, which neutralize substances that damage the body, so it may help fight disease. Frequent bouts of illness can keep an athlete off the track, field or out of the gym.

Take care that you don’t ingest too much caffeine. Viter Life explored how much caffeine is safe for healthy adults in this blog. Too much of it may cause insomnia, nervousness, muscle tremors and stomach upset.

Excess caffeine can also cause irritability, headaches restlessness, excessive urination and fast heartbeat. These side effects come with what MayoClinic.org calls heavy caffeine use of 500 to 600 milligrams per day. But how much caffeine is safe? About 300 to 400 milligrams of caffeine are right for an adult, about 100 mg for adolescents and none for children.

That blog posting also gives caffeine amounts for various products that contain it, including tea, chocolate, energy drinks and medications.

So, is having caffeine before working out a good idea? Yes.

Get 10% Off a Viter Energy Mints 6-Pack & Other Sweet Deals!